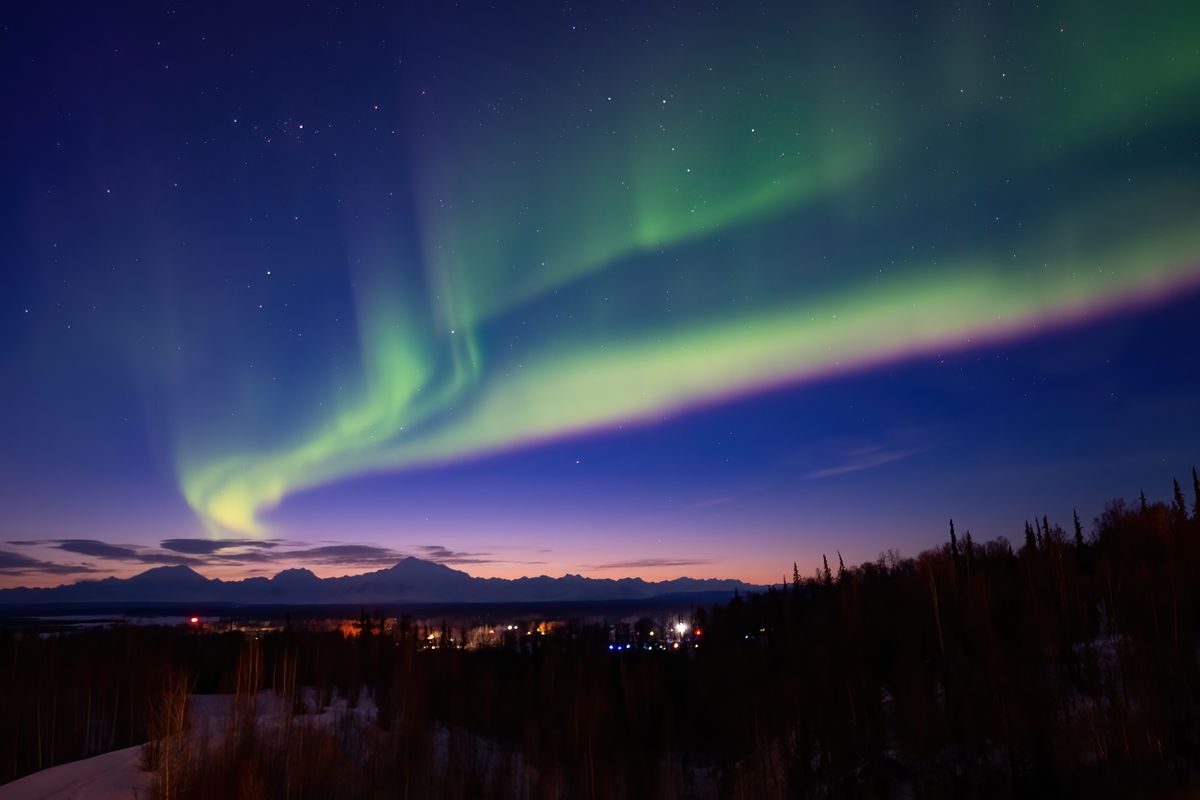 The sky has always fascinated me. Eclipses, meteor showers, Space Station fly overs... Heck, during the Hale-Bopp comet 20-something years ago I was up and out the door with my camera and tripod by 4am three or four days a week seeking new viewing areas around the county. Yeah, I guess I'm a a bit of a geek.

So, last month, I was fortunate to have tagged along with a MEDEVAC unit with the Alaska Army National Guard's 1st Battalion, 207th Aviation Regiment, for a week of training exercises. I went wearing my photojournalist hat for a project for Vertical magazine. It was here, however, Mother Nature treated me to an unexpected bonus; an opportunity to experience the Aurora Borealis or the Northern Lights!

The training began at the Guard's home base of Bryant Army Airfield in Anchorage. A few days later, we loaded up four UH-60 Black Hawks and a CH-47 Chinook and set off for Talkeetna to conduct the more advanced training evolutions. Some of which were conducted near 20,000 feet above the high glaciers on Denali.

Our base of operations was the Talkeetna Alaskan Lodge. It was still closed for the season, however, they opened up with a skeleton crew just to look after all of us for the week. It's a beautiful property perched high on a hill just south of town with incredible views to the west across the frozen Talkeetna river, to the mighty Alaska mountain range and the highest peak in North America, Denali.

By the first evening, word was circulating among many of us non-Alaskans, of a forecast for 'moderate' activity of the Aurora Borealis or the Northern Lights, sometime after 1am. The following evening, however, was forecast for 'high' activity.

For Alaskans, (which most all of the Guard soldiers were), the Northern Lights are old hat, almost as common as full moon for the rest of us. But for a handful of us who had never seen them, this was a bucket list event!

Because of the rigorous of the upcoming week's training schedule, and the forecast for better viewing opportunities the following evening, I decided this evening, sleep was a priority. The next morning the few folks that stayed up did report brief appearances of the lights. So my anticipation was piqued for the next evening.

After dinner with the Guard crews, I spent the balance of the evening poking around the Lodge property looking for moose and waiting on sunset. After returning to my room, I cracked a nice Añejo tequila and just kicked back, enjoying the beautiful vista from the lodge and the silhouette of Denali on the horizon.

Just after midnight, I began to see what initially looked to be a long, cylindrical, light colored cloud hanging in the sky. As I watched, it began to display colors; first greens, then blue, magenta, yellow... And it was moving, right toward me. As it did, the shape was constantly changing, morphing into colorful curtains or ribbons that seemed to cascade toward the earth, all the while, the colors shifted as they danced across the sky.

The lights gave us two 'performances' that evening. The first lasted about 25 minutes before it slowly flickered out over the mountains. About 10 minutes later, the color again appeared in the north and repeated a similar course and lasted about 20 minutes.

Of course I had my camera at the ready; a Nikkor 14-24 f2.8mm lens mounted to a Nikon z7. But of course, I didn't think bring a tripod with me on this particular trip, (actually, I did THINK about it, but room in my bag for warm clothes was the priority). So I was forced to improvise. I steadied the camera in my window on a bed pillow and bath towel and used the timer to avoid camera shake.

This frame was 12:59am on April 18th. It's an 8 second exposure at f3.5 at ISO of 1250. The lights of Talkeetna are in the foreground and Denali and the Alaska Range on the horizon. The pink is the afterglow remaining in the sky after sunset 2 1/2 hours earlier.