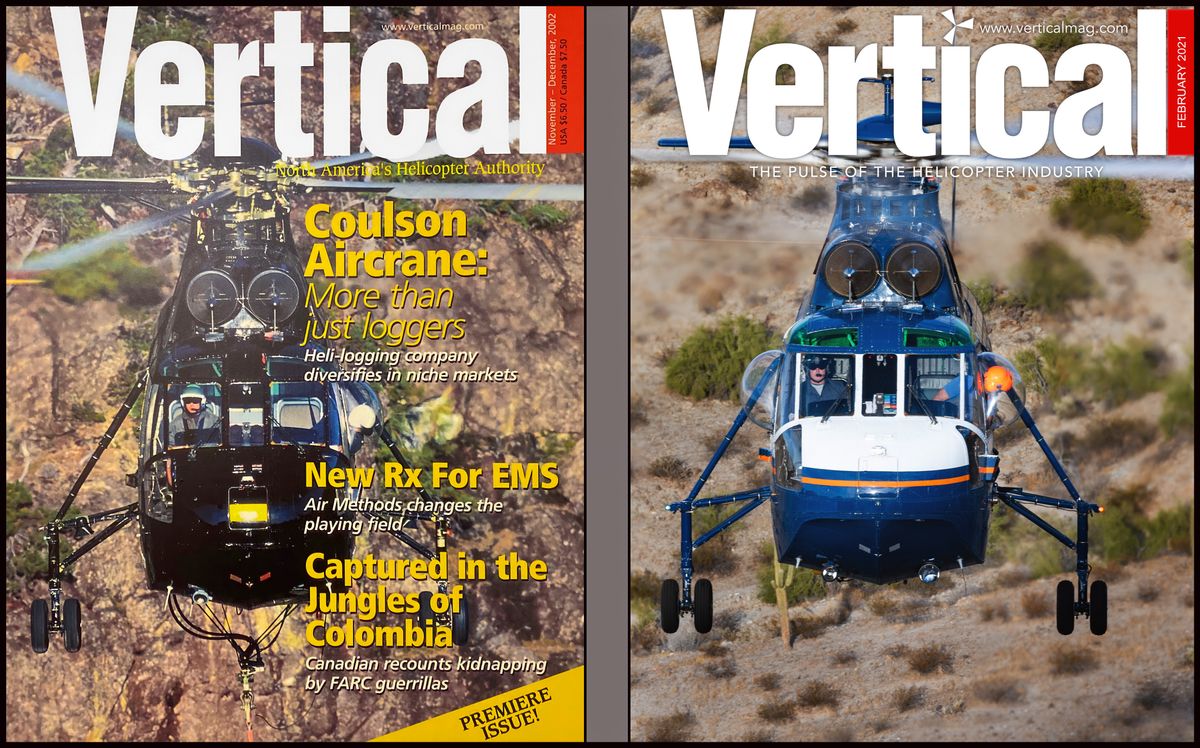 Back in 2002, Mike and Linda Reyno first introduced Vertical magazine to the North American helicopter industry. The cover story for their premier issue was an operator profile on Coulson Aircrane, a Canadian operator specializing in logging and heavy lift work.

The photo chosen for the issue cover was captured by Mike Reyno; a black 'short-body' Sikorsky S-61N owned and operated by Coulson. The photo depicts the helicopter hovering above a 'load' as if performing a 'heavy lift' job. It was piloted that day by Michael Lighter, (leaning out/looking down through the bubble window).

I first began producing work for Vertical in 2004. While I've always enjoyed all the various assignments over the years, I've particularly enjoyed the operator profiles. So last fall when Mike Reyno suggested I produce an operator profile on another Canadian heavy lift operator; Helicarrier Helicopters, I jumped at the opportunity.

As is often the case, Mike provided me a point of contact within the company to facilitate interviews and on-site visits. In this instance, he connected me with Aaron Lighter, an experienced heavy lift helicopter pilot who is also an ownership partner in Helicarrier. Mike went on to explain an interesting connection between Aaron and the cover of Vertical's premier issue.

You see, the pilot flying the S-61 in the magazine's premier issue was in fact Aaron's father and the helicopter he was flying is today owned and operated by Helicarrier. Of course, it was strongly suggested, as I plan my photography to illustrate the article, I make an effort to recreate the photo.

I learned the 'short-body' S-61 was based at Helicarrier's U.S. base in Buckeye AZ. Unfortunately, Aaron was out of the country and not available to participate in the photo shoot as a stand-in for his dad.

So last December, after a couple days in Las Vegas photographing a Helicarrier lift job with an AS350 Astar, I blasted down to the Buckeye Municipal Airport. There I met up with Helicarrier co-founder Fred Carrier, company pilot Eric Nance, a handful of support personnel and that 'short body' S-61.

By the time I arrived in Buckeye, there was only a narrow window of daylight left. Fortunately, the shot list was short. We crafted a plan to use only the S-61 to transport me out to a nearby desert hilltop and drop me off with a hand held radio. From there, I was able to coordinate the S-61 into a similar attitude and position, with Fred Carrier looking out of the bubble window, to somewhat represent that premier issue cover.