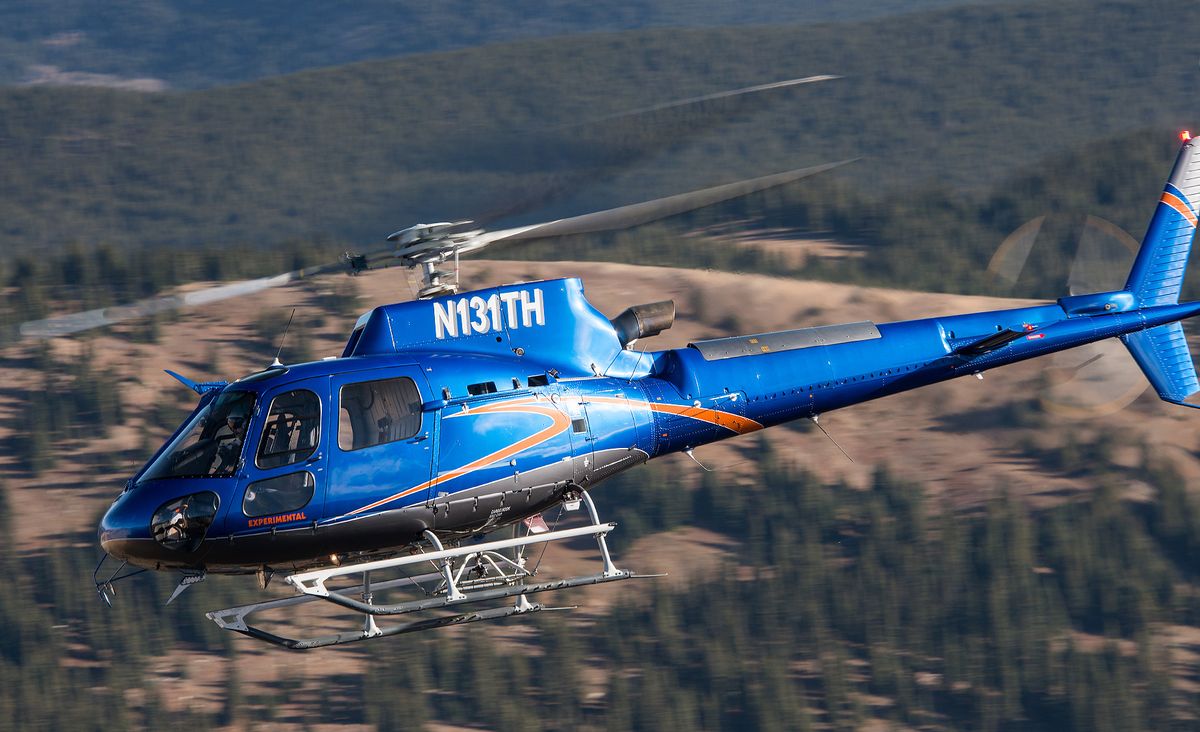 Typically when I head out on a photo gig I've already had several phone conversations with all parties involved to arrange and ensure the logistical support I need to make my visit a success. But sometimes, even the best thought out plans hit a snag and require creative thinking on the fly. This was one such instance...

It was fall in the Colorado Rockies and I was given the assignment to photograph an Airbus H125 that was configured with a new innovative airflow management system, the FastFin from BLR Aerospace. The product had just received its FAA certification and Vertical magazine already had an article ready to go from another writer, (The story can be found in the Dec 2016/Jan 2017 of Vertical magazine). My job was just to get photos that reflected the aircraft flying high in the mountains. BLR also requested video for their marketing so I invited my video guru, Shawn Adams to come along.

The aircraft was based in Gunnison CO however the pilot agreed to meet us anywhere in the state that might be more convenient. You see, I had to arrange a camera aircraft for us to shoot from and the closest I could find was many miles north in Steamboat Springs CO. So we agreed, Shawn, the camera helicopter and I would meet in the middle near Glenwood Springs and the H125 would rendezvous there.

Of course, on the morning of the planned shoot winds were forecast to be 50mph in the area between Steamboat and Glenwood and the pilot of the camera aircraft voiced his concerns, and rightfully so. But now I had to come up with a plan B, and fast.

So here it is, 8am in the Rocky Mountains and I have a pilot and Shawn converging on two separate parts of the state which was the original plan. Not having come up with any workable alternatives, I dropped a call on Vertical's publisher and long time friend Mike Reyno and explained my plight. We discussed and shot down a couple work around ideas and then Mike suggested, 'can ya get to some high ground and shoot where we could make it APPEAR as if we were in the air?' Great idea! After all, we're in the mountains, right?!

I hit Shawn and the H125 pilot with phone calls explaining the change in plans. We agreed to instead all meet in Gunnison by early afternoon. Shawn was just leaving the Denver airport in his rent a car and I mapped out my drive, (in my rented minivan which is a whole other story), from Glenwood down to Gunnison which per Google Maps was an easy 2.5 to 3 hour drive.

Well, if you didn't know already, Google Maps isn't always the most reliable source of travel planning, especially in remote mountainous areas. The 'fastest route' it mapped out for me put me on a narrow, sometimes quite steep and winding dirt, (turning at times to slush & mud), road for something like 40 miles. Oh, did I mention it began snowing around mile 15 or how I found the road washed out at mile 30? While it may sound like I'm whining, it was actually pretty fun adventure and awfully amazing to see the brilliant fall colors in such a remote corner of the state.

Anyway, five hours later my trusty minivan and I made it to Gunnison where we all met up and fine tuned the plan. We would fly up into the mountains the next morning and find a suitable high point with a near vertical cliff where Shawn and I could get dropped off and shoot.

The next morning we awoke to crystal clear skies and a crisp 27-degrees. But now we had to fly up to even higher and colder elevations for this project. Fortunately, Shawn found a box of hand warmers in the hangar so we filled our pockets, loaded up our gear in the helicopter and headed out in search of our perch.

We found an ideal spot just north of Crested Butte with a perfect exposure and background for the photos; 12,700 foot American Flag Mountain. We located a suitable landing area, set down, unloaded our gear, choreographed our shots and went to work. We communicated with the pilot via a hand signals and a handheld VHF radio and he skillfully put the aircraft in exactly the right position for each shot. And the BLR FastFin gave the pilot the tail rotor authority to easily work at that altitude, even downwind hovering.

To say we were tickled with our results would be an understatement. It was fabulous! The light and the setting was absolutely beautiful and the adventure for the three of us worth all the frustration. I captured many cool frames that day but this one I especially liked. First, as a photographer, the shallow depth of field separates the aircraft from the background. The aircraft 'pops' in the frame. But it also clearly shows important elements of the BLR modification, (along the lower portion of the tail boom). For me, the shot reflects a real sense of movement and flying high in the Rocky Mountains.

The entire story that ran in Vertical magazine is linked here - https://verticalmag.com/features/taming-the-squirrel/